You are here: Home / About Us / Executive Team

Prior to PC Enterprises, Inc., Norm’s career included a National Sales Manager role and Director of Marketing for Bendix Corporation out of Jackson MI, from 1975-1983.  Norm gained invaluable experience with Norton Company out of Detroit, Michigan; managing relationships with Ford, Chrysler and Eaton Company from 1968-1975.  Norm has been a sought out Director and has served on the Board of Directors for Jericho from 1983 through 1995; and was on the Board of Directors for Hawthorn Services from 1997-2005.  Norm has a Bachelors of Science degree in Finance from the University of Rhode Island in Kingston, and also attended the United States Coast Guard Academy in New London, CT.  Norm is a recognized football coach; as he served as Head Coach and mentor at Suffield Academy from 1991-1996.

Robert Braceland was recruited to PC Enterprises, Inc. in May of 2007.   Robert is responsible for customer acquisition, business development, vendor relationships, and the branding and marketing of PC Enterprises, Inc. products and services.  Robert holds a wealth of experience in the Office Products and Information Technology distribution supply channel including; call center management with $900Million in sales, strategic planning, staff development, presentation skills, demand generation, customer life cycle management, outside sales, P&L responsibility, as well as Retail Market Development.  Robert’s work experience in the OP/IT distribution channel with public companies like Synnex Corporation (SNX) as well as his entrepreneurial spirit is recognized by our manufacturer partners on a frequent basis.  Robert lives in Westfield, MA with his wife Jeanine and children Blake and Shea.

Robert possesses a Bachelor’s degree in Business Administration with concentrations in Finance and MIS from the University of Texas at Dallas.  Robert was instrumental in launching the sport of lacrosse in Texas and coached a high school club team from inception for Plano Senior High School from 1991 through 1996; Robert was awarded the Texas State High School Lacrosse Coach of the Year in 1994 and in 5 years had 2 Quarter finalists, State Semi Finalist, and State Champion Runner Up appearances.

Elizabeth Soticheck a most valued treasure of Entre Computer has been with the company since 1993.  Having come to the business as a 2 week temp employee; Liz excelled and worked her way up to Director of Finance and Administration.  Her responsibilities include: in house accounting, accounts receivable, accounts payable, financial reporting, purchasing, payroll, human resources and is considered the backbone of the PC Enterprises, Inc. team.  Liz lives in Agawam, MA with her family.

Liz graduated from Western New England University in 1979 with a Bachelor of Arts degree in government.  She went on to manage rental property for Valley View Apartments in Holyoke and later focused on raising a family.  In 1990 she went back to work as a substitute teacher in the Agawam Public School System until she arrived at PC Enterprises, Inc. in 1993.

Robert Bellamy joined PC Enterprises, Inc. Computer in 1991.  Bob started his career in sales and held account management roles for over ten years.  Bob was promoted to a managerial role in service and operations in 2002.  As Director, Bob is responsible for project management; inventory management, technician coordination, resource allocation, as well as all day to day service execution.  Bob continues to be the lead in process management; having selected, integrated and deployed our current service systems.

Bob was enlisted in United States Marine Corps in 1977 and honorably discharged in 1981.  After having relocated from East Providence to Westfield, MA; Bob has become an avid hockey fan and is the proud father of Olympic Silver Medalist, Kacey Bellamy; Elmira Jackals ECHL hockey player Rob Bellamy; and Columbus Cottonmouths SPHL hockey player Corey Bellamy. Bob lives in Westfield, MA with his family.

Bob’s daughter, Kacey, is once again a member of our Olympic Hockey Team. Bob is blogging from PyeongChang, South Korea. Blog coming soon.

Our Customers Say it Best

"Thanks to your team for working with us on no notice. Your technicians were very helpful, professional and were the reason we got through the project…"

Director of IT / Retailer

"Your receptionist and technicians bring a cheer to doing business with you. Always a pleasurable experience!…"

"Our late shift placed a call at 4:10am and your technician was on-site at 5:30am to resolve the issue; we experienced no loss of productivity and order entry for the day's business…"

"When I ask for help your team jumps at the opportunity to assist us with problem resolution. …Thanks for being a good partner."

Manager of IT / Marketing Firm

"Thanks for making our first experience with your company an exceptional one! Given the host of issues surrounding our network, we were pleased to see your technician identify the issues and correct them one by one in a structured manner not to mention that he stayed late until he was sure we would be up and running…" 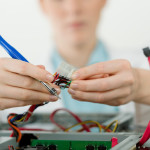 Along with the many products and services that we offer at Entre, however, we also offer specific resources to our clients that directly contribute to the success of their technology usage. Some of those resources include: Data Center Specialists Desktop Specialists Network